It'll Take Two Men to Pick Up Where Max Left Off!
by Bill Liberman 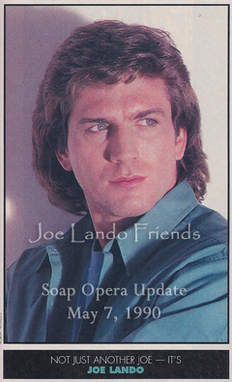 And OLTL’s John Viscardi and Joe Lando are the guys to do it.

Two 28-year-old actors have just joined the cast of ABC’s One Life to Live, hoping to win the hearts of Max Holden’s favorite ladies, Megan Gordon and Gabrielle Medina.  The fact that they’re the same age is not as coincidental as the fact that both their characters are currently involved in storylines that revolve around the presumed dead/missing Max.  But these two actors, John Viscardi and Joe Lando are reading, willing and able to make their own mark in Llanview, as we’re sure you’ll see in these interviews.

There’s another new man making strides in Llanview.  Andy’s half-brother has arrived in the form of actor Joe Lando.  Originally named Ross, Lando arrived on the ABC studio scene only to quickly have the character’s name changed to Jake.  It was believed the name Jake was better suited to the escapades—fleeing jail, being involved in criminal drug activity, having Michael Grande order him to trail Megan to sabotage Viki’s mayoral campaign—his storyline would gear him toward.

Joe Lando came to New York from California to being his reign as Jake on One Life to Live without knowing a soul in the Big Bad Apple.  He was actually hesitant in even auditioning for the role after coming to the Empire State three previous times to try out for roles on Another World, and coming up empty-handed.

His audition with Jessica Tuck (Megan Gordon) gave him the confidence he needed.  “She made me feel real comfortable.  She came up and told me things to avoid and things to try to do, as far as what they’ll be looking for.  Sometimes you don’t get very gracious actors or actresses who would do something like that.”  If that was an ego booster, then maybe the fact that his agent told him that he was the only actor being flown in to test for the part would be.  But it wasn’t.

“I thought, ‘Great.  I’m only up against myself.  So if I don’t get the part, I can’t blame somebody else, or say somebody else was better.’”

Well, obviously no one else was better, for the part went to Lando.  He lucked out in finding an apartment right away, on 45th Street.  “I’ve always been partial to the number 45 for some reason.”  Joe also feels he lucked out in being paired with Jessica Tuck, “one of the big stars on the show.  It can’t hurt me whatsoever.”

What may be hurting, however, is his face, if he doesn’t do the dirty work Michael Grande has ordered of his character—following Megan Gordon to obstruct the mayoral campaign of Viki Buchanan.  “Somebody’s got to help him,”Lando wonders of his on-screen persona, Jake.  “He’s got himself in kind of deep with something.  Jake was carrying some money that was going to be laundered for some drug people who are connected with Michael Grande.  So what he’s done wrong here is that he then was sent to prison and signed up for work detail so that he could get himself out.  It’s kind of like the ‘Cool Hand Luke’ scenario.”

And speaking of movies, they were the key to getting Lando interested in the acting business when he was a mere tot.  “I used to sit and memorize the ‘TV Guide’ on Sundays when we got it.  I’d read the credits in the back and check out when the movie was made and who directed it and who starred in it.  And I knew how many stars they got.  Mostly black and white movies.”  But even then he wasn’t sure.

But when Joe Lando turned 18, he decided to give it a shot.  He moved to L.A. just as his high school sweetheart would.  Just for the record, his girlfriend from Adlai Stevenson High School in Illinois is currently starring on the Fox Network’s Open House comedy series.  Her name?  Allison La Placa.

As any struggling actor knows, the way to a successful career is at one time or another becoming a waiter, so later on in your successful career you can tell any inquiring reporter about all of the famous people you waited on while you were working your way to the top.

At one L.A. restaurant Joe worked at—“I used to spin pizzas.  When I say spin pizzas, I don’t mean just throw them up in the air.  We’re talking throw it up in the air, the other guy catches it.  Walks out towards the people, spins it, throws it back, you know that kind of deal.”  There was a fellow waiter who used to walk around and sing a lot.  “I remember one day saying, ‘Hey, you know what, Jack?  You’ve got a good voice.’  It was Jack Wagner, and we know where he is today.  So Jack and I worked in the same restaurant in 1984-85.  I didn’t know he was a singer.  I figured he was probably an actor or a model or something.  The restaurant was full of them.”

But there’s one less waiter now that Joe Lando is the newest addition to One Life to Live.  If you have a hankering, however, to rate the skills of the pizza-juggling Lando, right before nailing the part of Jake on OLTL, he added a technical adviser credit to his resume—teaching the likes of Kevin Kline, Tracey Ullman and River Phoenix to spin pizzas for the currently released Lawrence Kasdan feature “I Love You to Death.”  Yes, it seems like the moon has hit Joe Lando’s eye! 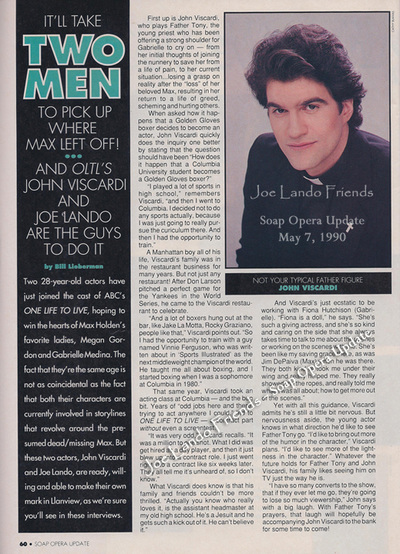 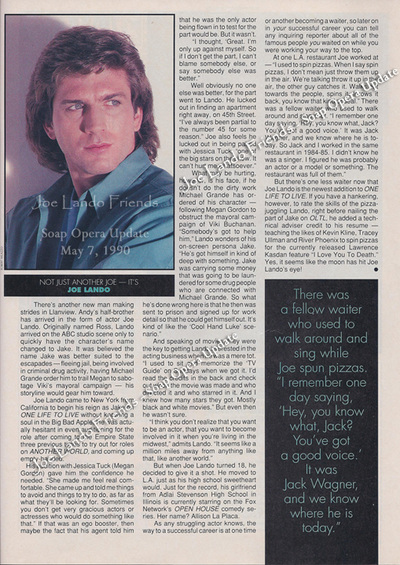