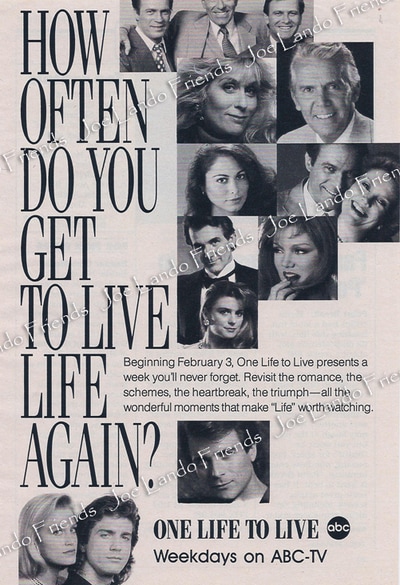 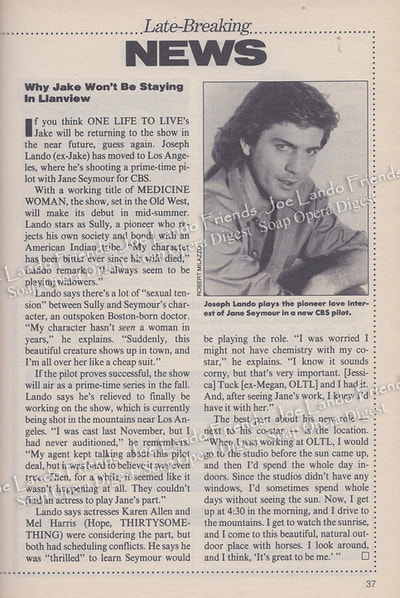 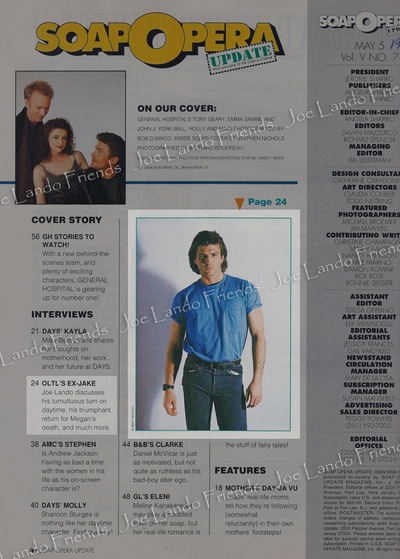 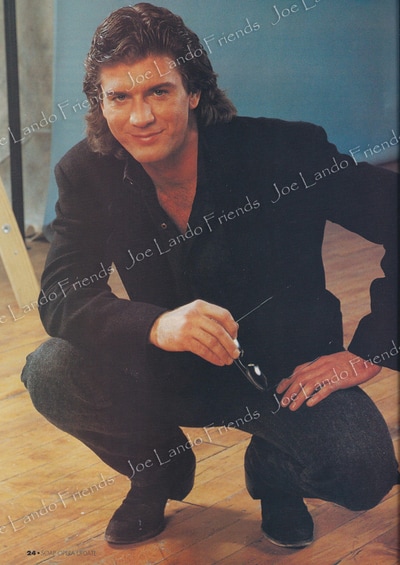 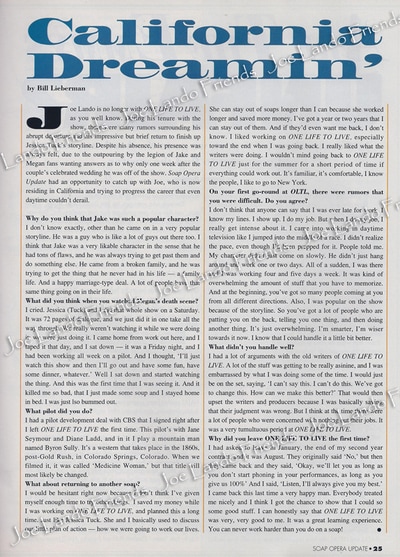 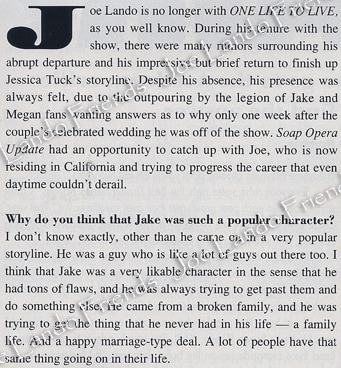 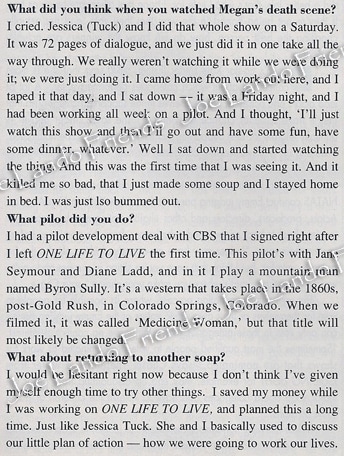 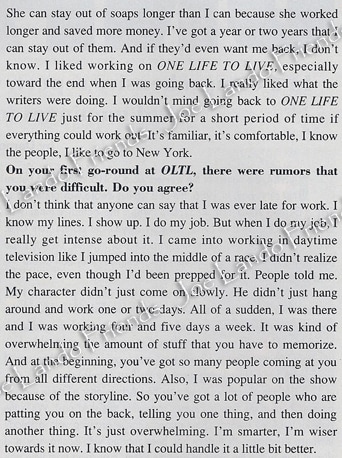 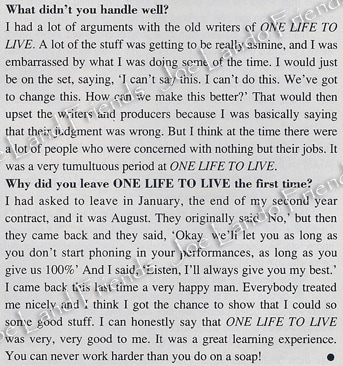 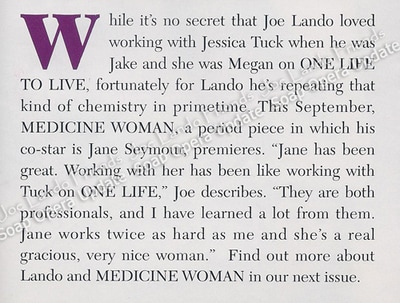 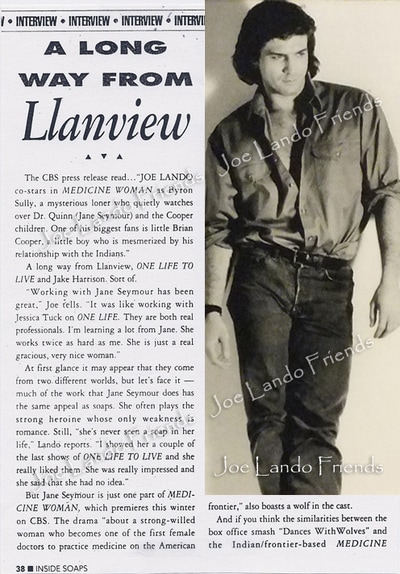 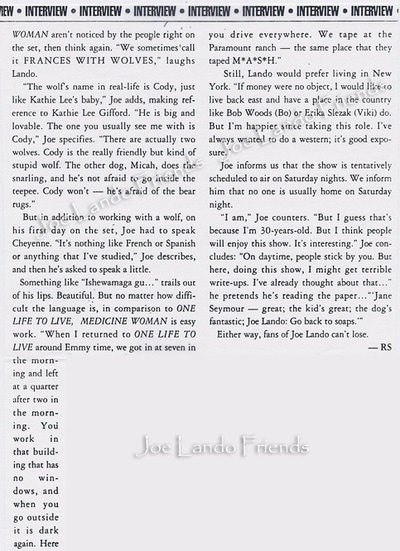 The CBS press release read... "JOE LANDO co-stars in MEDICINE WOMAN as Byron Sully, a mysterious loner who quietly watches over Dr. Quinn (Jane Seymour) and the Cooper children.  One of his biggest fans is little Brian Cooper, a little boy who is mesmerized by his relationship with the Indians."

A long way from Llanview, ONE LIFE TO LIVE and Jake Harrison.  Sort of.

"Working  with Jane Seymour has been great," Joe tells.  "It was like working with Jessica Tuck on ONE LIFE.  They are both real professionals.  I'm learning a lot from Jane.  She works twice as hard as me.  She is just a real gracious, very nice woman."

At first glance it may appear that they come from two different worlds, but let's face it -- much of the work that Jane Seymour does has the same appeal as soaps.  She often plays the strong heroine whose only weakness is romance.  Still, "she's never seen a soap in her life," Lando reports.  "I showed her a couple of the last shows of ONE LIFE TO LIVE and she really liked them.  She was really impressed and said that she had no idea."

But Jane Seymour is just one part of MEDICINE WOMAN, which premieres this winter on CBS.  The drama "about a strong-willed woman who becomes one of the first female doctors to practice medicine on the American frontier, " also boasts a wolf in the cast.

And if you think the similarities between the box office smash "Dances with Wolves" and the Indian/frontier based MEDICINE WOMAN aren't noticed by people right on the set, then think again.  "We sometimes call it FRANCES WITH WOLVES," laughs Lando.

"The wolf's name in real-life is Cody, just like Kathie Lee's baby," Joe adds, making reference to Kathie Lee Gifford.  "He is big and lovable.  The one you usually see me with is Cody," Joe specifies.  "There are actually two wolves.  Cody is the really friendly but kind of stupid wolf.  The other dog, Micah, does the snarling, and he's not afraid to go inside the teepee.  Cody won't -- he's afraid of the bear rugs."

But in addition to working with a wolf, on his first day on the set, Joe had to speak Cheyenne.  "It's nothing like French or Spanish or anything that I've studied," Joe describes, and then he's asked to speak a little.

Something like "Ishewamago gu..." trails out of his lips.  Beautiful.  But no mater how difficult the language is, in comparison to ONE LIFE TO LIVE, MEDICINE WOMAN is easy to work.  "When I returned to ONE LIFE TO LIVE around Emmy time, we got in at seven in the morning and left at a quarter after two in the morning.  You work in that building that has no windows, and when you go outside it is dark again.  Here you drive everywhere.  We tape at the Paramount Ranch -- the same place that they taped M*A*S*H."

Still, Lando would prefer living in New York.  "If money were no object, I would like to live back east and have a place in the country like Bob Woods (Bo) or Erika Slezak (Vicki) do.  But I'm happier since taking this role.  I've always wanted to do a western; it's good exposure."

Joe informs us that the show is tentatively scheduled to air Saturday nights.  We inform him that no one is usually home on Saturday night.

"I am," Joe counters.  "But I guess that's because I'm 30-years-old.  But I think people will enjoy this show.  It's interesting."  Joe concludes:  "On daytime, people stick by you.  But here, doing this show, I might get terrible write-ups.  I've already thought about that..." he pretends he's reading the paper... "'Jane Seymour -- great; the kids great; the dong's fantastic; Joe Lando:  Go back to soaps.'" 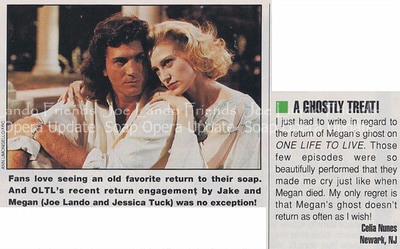 December 28, 1992 - The Hartford Current - Hokum Dooms Dr. Quinn, Medicine Woman to be More Comedy Than Drama
Note:  Over the years, Jane Seymour has often said that everyone told her that Dr. Quinn would never work.  Here is one such article.
By JAMES ENDRST; Courant Television Columnist
THE HARTFORD COURANT
If you want some laughs, real, honest-to-goodness laughs, don't miss the new CBS drama "Dr. Quinn, Medicine Woman." That's right, it's a drama.
But what a joke.
Jane Seymour ("War and Remembrance," "Live and Let Die") stars in this silly concoction as Dr. Michaela Quinn, a determined woman who leaves her Boston home and becomes one of the American frontier's first woman doctors after the death of her partner in the field, her father. Answering an ad for a town doctor in Colorado Springs, the good Dr. Quinn knocks the locals for a loop when they find out that "Dr. Mike" is a woman. And just so viewers know this is a family show (with a '90slike single head of household) Quinn quickly adopts three orphaned children left to her by guest star Diane Ladd (who, for all we know, may have succumbed to the script).  ► Read More 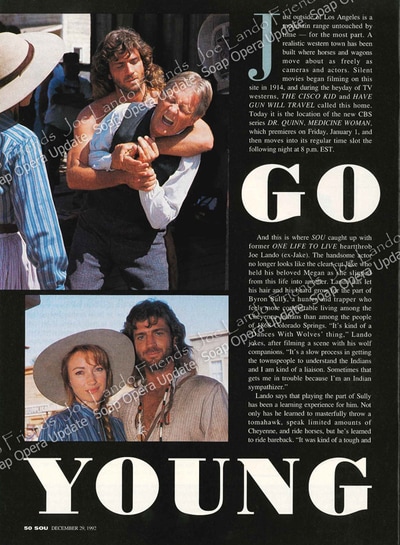 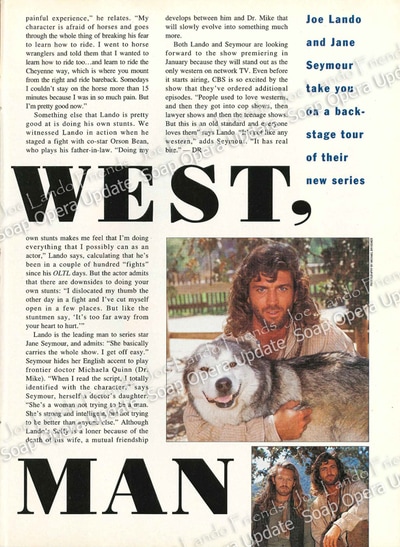 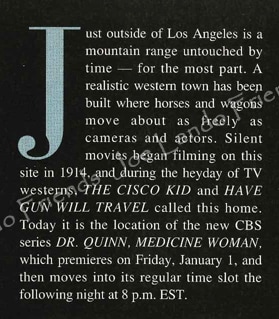 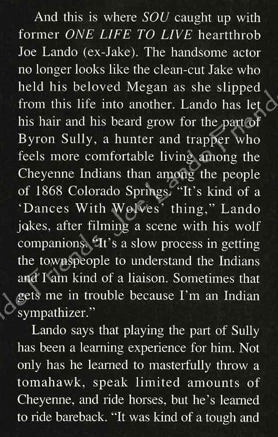 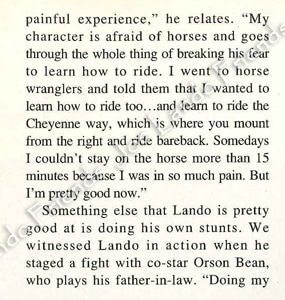 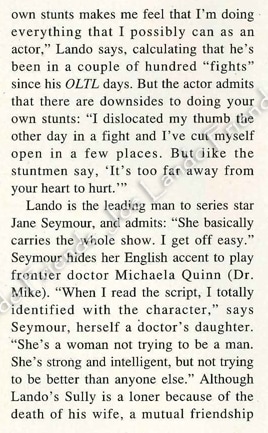 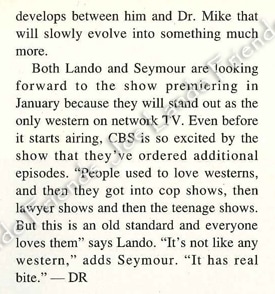