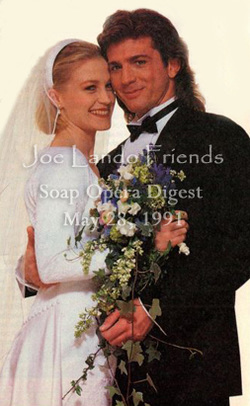 Jessica Tuck certainly must have set some kind of soap record.  How many young leading ladies play characters for almost three years, fall in love four times, and yet never marry?  The powers-that-be at One Life to Live must have started to wonder the same thing.  So when mail began pouring in raving about the magical pairing of Jake (Joe Lando) and Megan (Jessica), they decided to marry them.

It’s no secret that at first meeting, neither Jake and Megan, or Jess and Joe particularly cared for each other.  Nonetheless there was a certain unnamable something that came through.  Executive Producer Paul Rauch noticed it, and so did the actors.  “Even when we hated each other, it still came out that there was something there,” says Lando.  “Somewhere along the line, we hit it off.  It got better.  There is chemistry between Jessica and Joe.”

Once the backstage problems were resolved, the on-screen problems began for this budding super couple.  Jake was unable to commit, then married another woman.  Megan became involved with another man (Hunter, played by Leonard Stabb).  Then Jake had to leave Megan in order to protect her from Carlo.  All the adversity only made the viewers more eager to see the couple together.  “We’ve gotten the best response on Megan and Jake than any other of the men I’ve been with,” says Tuck.  “The time is right, and Jake is the right man.  Megan has been around the block, and it’s about time she got married.  They make a good couple.”

Jake sees security in Megan, but with a bonus—he loves her.  “Jake comes from a broken family.  He’s very adamant and excited about getting married,” says Lando.  “What it represents to this guy is his idea of what a family is supposed to be, what life is supposed to be like.  He wants it desperately at this point.  He found somebody who he can actually be in love with and stay in one place for.  He sees that he can have that with this woman, the security of having your own family and not you against the world.”  More importantly, says Tuck, Jake and Megan are fun.  “You can see them getting married and it not ending their relationship,” she notes.

She can say it, but it doesn’t make it true.  What actors fear—that marriage will kill their story—often is the case.  Though Tuck says she and Lando will fight against marriage stagnating their characters, it’ll be a tough battle.  “It would kill us is if all of a sudden they focused on the fact that we were married and everything became about the fact that we were married.  Which they always do,” she says.  “But Jake and Megan can be interesting in spite of the fact that they are married.  He is a private eye, so she can get involved in his capers.  Like Moonlighting.”

Lando also has ideas about how to keep the couple interesting as well as provide an easy out for Tuck when she leaves Llanview in January.  “Jake could have a problem with the pressures of being married,” he suggests.  “Let’s give him something like an internal conflict within the relationship, rather than always having extraneous things like getting handcuffed to a bathroom or something like that,” he says.  “Maybe Jake should have a drinking problem.  Or maybe Megan departs and leaves him a single father.  They didn’t like that story.  And they don’t like Jake as an alcoholic,” he says.  “I don’t talk to the writers anymore because I find that a lot of times I am patronized.  They say, ‘That’s a good idea,’ then [pat you on the head].  Basically, I know what will happen to Megan and Jake.  They will always be white bread almost.”

But, if the future looks bleak, the present (i.e. the wedding) looks exciting.  Plans are for a big bash to take place at a country church.  And, ironically, this is not only a first marriage for Megan and Jake (well, his first big wedding), but for Jess and Joe as well.  “I knew I would get married on TV before I got married in real live,” Lando says, laughing.  “I was thinking about it this morning while I was shaving. ‘I’m getting married on TV.’  After thinking about it, and all the stuff that surrounds it, I know when it comes down to getting married, I’ll choose to have a quiet, small wedding.  This will be the wedding that I won’t have in real life, as far as the big bash goes.”

Tuck wholeheartedly agrees.  “I don’t think it’s weird that I’m getting married on TV before I get married in real life.  I just think it’s weird that I’m getting married on TV.  That feels more strange,” she observes.  “We had a fitting for this dress, and I’ve lost weight since then and I think it’s just the excitement of going through all this.  We made the dress, we had all these fittings, we can’t find a location for the shoot, blah, blah, blah.  It seems like a bit much.  Having done this as a character, I don’t think I could stand a real formal wedding.”

So nontraditional is Jessica that she’s not even worried about whether Megan has her something old, something new, et cetera.   She’s more concerned that the wedding is portrayed as fun, and “groovy.”  “I am really pleased that they’re giving me young bridesmaids.  Sometimes they have these weddings and it’s like the people getting married are fifty years old.  They have such stodgy weddings,” she says.  “Tina is my maid of honor, and I’ve got Andy and a girlfriend of Megan’s from college.  You kind of feel that could happen in real life.  We’re trying to stay away from everyone dressing in fancy evening gowns so it will look like a real wedding.  Sometimes when we get dressed for these weddings, I feel like Prince Charles and Lady Di a little bit.  Have it be a young wedding.  We are young.  It would be really fun to have a big party and not have it filled with people getting killed.”

Paul Rauch claims it will be a trouble-free, romantic wedding, but adds “I have no promises to make about the future.”